Over a million people in rural California have a highly toxic chemical in their water that some experts say is one of the most powerful cancer causing agents in the world. It was sold to farmers as a pesticide when Dow & Shell knew it was simply toxic waste that they wanted to sell, rather than pay for disposal — similar to what’s being done with fluoride in municipal water supplies. The problem is not limited to California and it’s not limited to this particular chemical. What is being done about it and what can YOU do to protect yourself?

Description: Mike Papantonio discusses Dupont’s chemical called GenX that has been found in the drinking water of North Carolina residents and speaks with attorney, Chris Paulos about the case.

Michigan Health and Human Services Director Nick Lyon is one of the highest ranking of five Michigan state officials charged with involuntary manslaughter after 12 people died from Legionnaires’ disease after drinking from the Flint water supply. RT America’s Ashlee Banks has the story.

In this video I go over the basics for setting up a Rain Water Catchment System. Enjoy! –GM

What happened in Flint Michigan, how was it discovered, and how many more Flints are there?

The city of Flint, Michigan has mailed more than 8,000 letters to residents, trying to collect $5.8 million in unpaid water bills. Flint resident Melissa May says the water she is being asked to pay for is “blue” and contains neurotoxins. Meanwhile, residents who do not pay up face foreclosure. RT America’s Natasha Sweatte has the story.

Up to 77 million Americans were serviced in 2015 by unsafe drinking water systems, with 18 million people exposed to excessive levels of lead and copper, a new study found, adding that penalties for violations are “virtually nonexistent.”

“The actual number of violations and systems breaking the law is likely substantially higher because of probable widespread underreporting,” the authors of the study by the environmental advocacy group Natural Resources Defense Council (NRDC) say.

According to the research, entitled “Threats on Tap: Widespread Violations Highlight Need for Investment in Water Infrastructure and Protections,” violations were reported in all 50 states in 2015, including the District of Columbia, Puerto Rico, and other territories covered by the Safe Drinking Water Act (SDWA).

The top five states with SDWA violations by population proved to be Texas, Florida, Pennsylvania, New Jersey, and Georgia.

Texas saw the lion’s share of health-based violations, affecting more than 4.9 million people. Puerto Rico came in second, with more than 2.4 million, followed by Ohio, Maryland, and Kentucky. When ranked by percentage of total population served, Puerto Rico had “the highest percentage of any state or territory, with 69.4 percent of its population served by community water systems with health-based SDWA violations,” according to the study.

Meanwhile, very small systems, found in rural or sparsely-populated areas, account for more than half of all health-based violations, researchers said.

“Systems serving less than 500 people accounted for nearly 70 percent of all violations and a little over half of all health-based violations. This means that rural Americans could be at greatest risk from some drinking water contaminants,” the report warned. 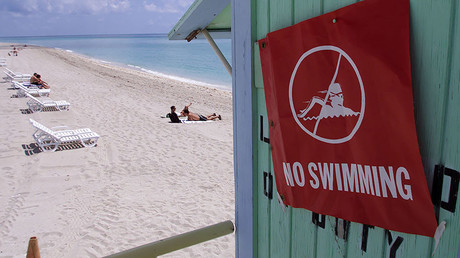 “The problem is twofold: there’s no cop on the beat enforcing our drinking water laws, and we’re living on borrowed time with our ancient, deteriorating water infrastructure. We take it for granted that when we turn on our kitchen tap, the water will be safe and healthy, but we have a long way to go before that is reality across our country,” he added.

Researchers cited data from the Centers for Disease Control and Prevention (CDC), according to which approximately 19.5 million Americans fall ill every year from pathogens as a result of contaminated drinking water from public water systems.

The young, the elderly and immunocompromised individuals are particularly vulnerable, the report noted, adding that “No comprehensive estimates have been published of the number of cancers, reproductive and neurological diseases, or other serious chronic health problems caused by contaminated tap water.”

Meanwhile, repercussions for violations are “virtually nonexistent,” the study said. According to the Environmental Protection Agency’s (EPA) Safe Drinking Water Information System (SDWIS) data, of over 80,000 reported violations that occurred in 2015, the agency and states took formal enforcement action against a mere 13.1 percent.

“Agencies took formal enforcement actions against 21.2 percent of health-based violations. Furthermore, penalties (either criminal punishment or civil fines) were sought or assessed for only a tiny fraction (6.7 percent) of violations,” the report revealed.

#FlintWaterCrisis: 1,096 days, over $100mn in aid and US city still has no clean drinking water

According to NRDC’s report, even at its current level of funding, “the EPA and states are doing an inadequate job of monitoring, testing, and enforcing safe drinking water laws.”

Reductions in research funds will roll back programs on climate change, water quality, and chemical safety, as well “safe and sustainable water resources,” the document said, as cited by the newspaper.

Michigan has been at the center of a public health crisis since 2015, when tests found high amounts of lead in blood samples taken from children in Flint. In late April 2014, after at least a year of deliberation and negotiation, Flint officials and its state-mandated emergency manager switched the city’s drinking water supply to the Flint River. Residents soon complained of the water’s odd tastes, smells and coloring while officials repeatedly told them the water was safe to ingest. The situation became a full-blown crisis when, during the summer of 2015, rising levels of lead were being detected in children’s blood.

It was later determined that the Flint River water was not being treated properly, and that lead from aging water pipes was bleeding into the water supply.

VLOG120. One of our plots has no water. I’ve imporivsed a solution to get it back. Also showing laying of landscape fabric, and a farm update.