“A book is proof that humans are capable of working magic.”
– Carl Sagan

“If you want children to be intelligent, read them fairy tales.”
– Einstein

“Books are the mirrors to the soul.”
Virginia Wolf

This one’s a quick haul.  To spice it up just a smidge, this bookhaul will only feature leatherbound books purchased early summer.  Enjoy.

A novel that could be said to be ‘ahead of its time’.  Wasn’t sure what to expect, but I can honestly now say that I really enjoyed the unique point of view brought about through the unorthodox way the story is related by Bram Stoker.  Stoker employed the use of letters, personal entries, ship logs, newspaper articles, etc., to tell the story from each character’s unique point of view.  Certainly this is something one nigh never sees, but which worked out rather well given its uniqueness.  The story is a bit slow at times, but engrossing enough to keep you going if you’re a fan of the genre.

The Foundation Trilogy by Isaac Asimov

One of the classics in Science Fiction, from one of the Big 3 in science fiction.  What’s not to like?

It’s been said this is one of Asimov’s great works and I am looking to finishing it.  Finished book #3 in the Foundation series, which is the first book of this trilogy three days ago.  I really enjoyed the book, although enjoyed the previous prequel duet more.   Still, I am looking forward to finishing this trilogy and moving on to the last books thereafter.  Definitely a highly recommended series for fans of science fiction.

Since I had never read anything from Gaiman, I knew not what to expect.  That said, many of my friends really enjoy his work and thought I would as well.  Having read this book, I was intricately surprised at the uniqueness with which he brought about this particular story employing Gods as the foundation for various characters throughout the story.  Not what was expected, but in a very refreshing way.

The Wizard Of Oz by L. Frank Baum

The Wizard Of Oz, Barnes & Noble Ed. features the first five novels of the Wizard Of Oz Series.  It’s a book that’s simple to read, but quite entertaining as well.  I myself am only familiar with parts of the story, so thought it interesting to avail myself of the rest whenever there’s downtime around.  Back when The Wizard Of Oz initially came out there wasn’t almost anything like it out there, and it made it stand out like lightning in a clear sky.  That said, it has stood the test of time as a classic in literature. 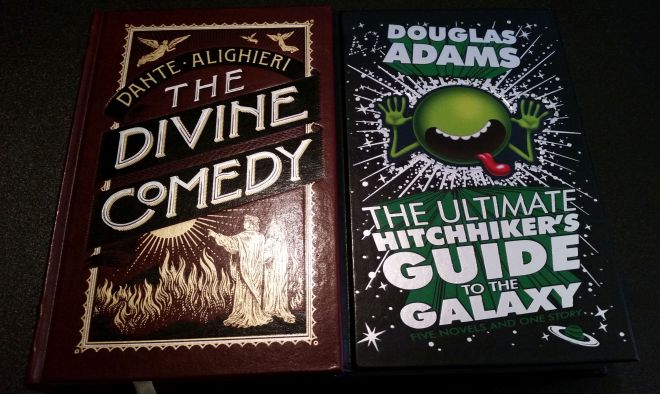 The Divine Comedy by Dante Alighieri

The quintessence of the classics, The Divine Comedy was a bit harder to read given its old English writing, but it’s not anything someone can’t overcome with a little hard work and perseverance.  After a while you begin picking up the language rather swiftly and it becomes nigh automatic how easy you can comprehend what’s being said.  A very rewarding, breathtaking and imaginative book, especially for its time.**

The Ultimate Hitchiker’s Guide To The Galaxy by Douglas Adams

Although the plot could have been better, the humor more than makes up for it.  This book is downright hilarious while still offering a very novel story that holds the ship above water.

Surprisingly, this was a very great book.  The quality of the short stories is great, and the stories within all read seamlessly, and are much better and interesting than I expected.  I really hope B&N follows up with another book of later episodes.

All things considered, it’s been a busy and entertaining few weeks.  Having read most of these it was a very unique experience and one glad I took the time to undertake.  I am usually more fond of reading nonfiction research books, but now and again I opt to involve a dash of something different.  Thankfully, all of these books delivered and a few were better than expected.  I look forward to setting up more time to finish up those I haven’t read, and hopefully continue to catch up on some of the classics.

Have any of you read any of these or have any books you would like to recommend?  What are your favorites?  Hope all is well.

His other blog, BreakawayConsciousnessBlog.wordpress.com features mainly his personal work, while TheBreakaway.wordpress.com serves as a media portal which mirrors vital information nigh always ignored by mainstream press, but still highly crucial to our individual understanding of various facets of the world.