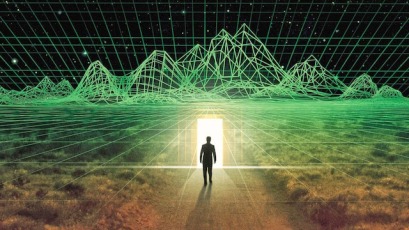 In my work as a reporter over the past 35 years, I’ve studied how major media cover stories. One of their consistent blunders:

But it isn’t really a blunder.

There is a boundary, and reporters aren’t allowed to cross it.

Therefore, it looks like these reporters are inherently stupid. They don’t ask the right questions. They back away from a story just when it becomes vital.

Well, many of them are stupid—but it’s often a trained response. Over time, they learn to act as if they’re clueless; and then, after years, they are.

What is this boundary? It’s the line beyond which “important people” would be damaged and exposed, if the reporter followed his instincts and pressed forward.

Important people, important institutions are like giants standing on slippery mud. Give them a push, and they fall. Start digging around in the mud, and they fall.

The underlying dictum of the press is: Official reality must never fall.

Here is a stunning example of a day when it did—a UFO encounter for the ages.

Altomonte dug up a November 6, 1957, article from the LA Times. Not just any article. Page one, under a huge black banner headline at the top of the page: MYSTERY AIR OBJECTS SEEN IN SKY OVER LA.

Read these 1957 quotes, and remember, this is the LA Times, the most important newspaper in Los Angeles, and one of the leading papers in the US—during a time when print journalism was still the main source of information for the public.

“They (USAF personnel) spotted six ‘saucer shaped flying objects’ at an altitude of about 7000 feet at the base of a cloud bank about 3:50 p.m.”

“Lt. Richard Spencer, a flying officer, saw the object from the ground. ‘It was not a star and it was not an airplane’, he said. He admitted, however, that it appeared to be ‘starlike,’ and added that it glowed in varying colors, changing from bright to dim and back again.”

“Lending credence to the reports was the fact that…Air Force weather observers, including the commanding officer of the unit, acknowledged sighting unidentified phenomena over Long Beach Municipal Airport.”

“They spotted six ‘saucer shaped flying objects’ at an altitude of about 7000 feet at the base of a cloud bank about 3:50 p.m.”

“Maj. Louis F. Baker, commanding officer of the weather observation post, who sighted the objects with his assistants Airmen Joseph Abramavage and William Nieland said: ‘They were circular and shiny like spun aluminum changing course instantaneously without loss of speed like planes in a dogfight,’ Maj. Baker said. He said the objects were larger than a twin engine C-46 aircraft and were in sight for about a minute and a half.”

“The objects also were observed by 10 military personnel waiting to board an airplane at the airport, the spotters reported. Maj. Baker said he rejected the theory that the objects were sheet ice in a cumulonimbus cloud because of their regular circular shape.”

“An electronics executive, Merlin G. Perkins, 1102 N. Wright St., Santa Ana, said he observed an object though binoculars for almost a half hour as it moved slowly overhead finally fading away into the reflected light above the Santa Ana business district. It appeared to be round and it winked slowly from dim to bright, with a reddish glow, Perkins said.”

The November 6, 1957, LA Times also ran a short piece from the Associated Press, dated a day earlier. AP is, of course, one of the two or three largest news wire services in the world.

There is much more to Altomonte’s article, but you’re getting the picture.

As far as the LA Times was concerned, back in 1957, what happened next? What did they do?

One of the most significant events in modern times occurs over the skies of Los Angeles, with multiple professional observers (and private citizens also quoted), so you would assume an EXTENSIVE INVESTIGATION would be launched.

“OK, boys, this is when you earn your paychecks. You’re supposed to be relentless reporters. I’m your boss, and this is when I earn my paycheck, too. I’m setting you loose. I don’t care how long it takes. Find out what the hell this is. Break down doors. Go up against the Pentagon and the CIA. The Times will back you up. Is it people from another planet? Is it our own secret craft, with onboard technology no one has ever heard of? Is it Nazis, Russians? We’re going to chase this until the cows come home. And by cows, I mean you. Come home with the true story. We’re not going to let go. You’ll never cover another story like this in your lives…”

The massive follow-up that should have launched from the Times, like rockets, was squelched.

Looking at the LA Times archives, for the day AFTER the boggling UFO story, I find two major headlines. The first is above the masthead: “Halimi beats Macias for Title.” The second: “Rocket Artillery Unveiled by Russ[ians].”

“Say Bob, do you recall that thing where a whole lot of UFOs flew over the city? Did it really happen? Maybe I just had a dream about it. Strange…”

And thus, official reality is preserved.

A hole ISN’T punched in the literal and figurative sky. Instead, citizens go about their business and their lives.

Collective reality is often maintained through omission. A shocking event occurs, an event which, if pursued and investigated, would change the course of history. The press is forced to cover the event…which then sinks below the waves. By design.

If you assembled, say, a hundred such shocking occurrences end to end, and you watched them bob in the water and then disappear from view, the residue—what is left over—would be official reality.

The event I cite most often in these pages occurred on July 26, 2000. That was the day the Journal of the American Medical Association, one of the most prestigious medical journals in the world, published a review by Dr. Barbara Starfield, a respected and revered public health expert at the Johns Hopkins School of Public Health. The review was titled: “Is US Health Really the Best in the World?”

Dr. Starfield concluded that the US medical system kills 225,000 people a year. In a follow-up interview I did with her, she said this was a conservative estimate.

Extrapolate: Every decade, the US medical system (through FDA approved, correctly prescribed medicines, and mistreatment in hospitals) kills 2.25 MILLION Americans. Let that sink in.

When Dr. Starfield’s review was published…