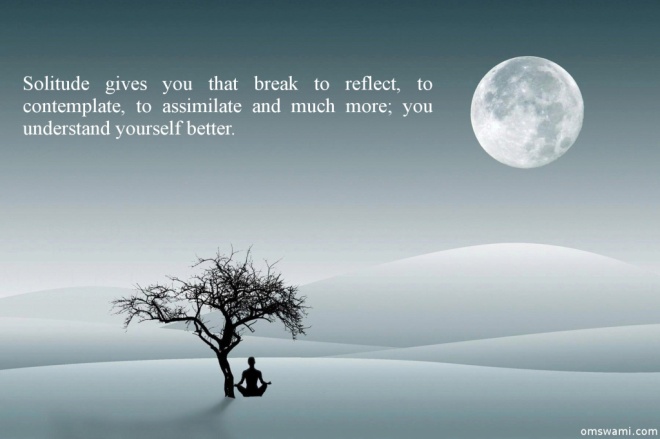 Rilke’s family emboldened him toward a career in the military, but it soon became evident that he was meant for a more creative life. Surely, in his transition from a military school to the flourishing writer he became, he had to experience a few burning questions of the heart. Was he doing the right thing? Could he succeed at his craft? Would the world recognize his mastery of verse and accept him?

At the time of Rilke’s death, he was revered by many European artists, but most of the rest of the world was ignorant of his genius. This has changed over time.  His poems have been read and re-read in quiet homes, and in front of thousands at institutions of higher learning.

One of the singularly perfect tidbits of advice he gives is offered in Letters to a Young Poet, a collection of ten letters (which could have been written to his own developing psyche) meant to be absorbed by any young poet who wants to connect with and nurture their own creative soul.

The book explores many themes, and has come to be accepted as a sort of guide for life. It touches on the importance of solitude, the relationship between creativity and nature, and advises us all on how we can live a fuller life.

This one sentence of Rilke’s is replete with creative consciousness:

“Have patience with everything that remains unsolved in your heart. . .live in the question.”

How many of us struggle to let go and embrace a state of not-knowing? That. Feels. Like. Crazy. Yet others, like John Allen Paulos, attest that uncertainty is all there is, and knowing how to live with the insecurity is the only security.

Here’s the thing, though. Our egos cling desperately to an anchor in reality, yet all permanence is an illusion. Jobs change. Relationships change. People change. Even you change – constantly. We usually look to the future as if it has all the secrets to our happiness, but we pin the “future” on false assumptions about now.

It’s as if we are waiting for some Deus ex machina – a big break: our soul mates to arrive, a huge endowment from a relative, a final law passed by the government, etc. – to wrap up the story of our lives so we can stop thinking about what will come next.

Anything would be better than not knowing.

Or, we could take Rilke’s advice.

We can realize that a flower won’t grow and blossom if it clings to its roots. We could lean on the teachings developed by the Buddha over 2000 years ago on impermanence. Franz Kafka got it. He said, “The decisively characteristic thing about this world is its transience. In this sense, centuries have no advantage over the present moment. Thus the continuity of transience cannot give any consolation; the fact that life blossoms among ruins proves not so much the tenacity of life as that of death.” Bhikkhu Ñanamoli once offered, “whatever IS will be WAS.”

This means that not only pleasant circumstances and experiences will pass away, and should be enjoyed fully knowing this, but that the anger, frustration, jealousy, confusion, and other emotions that are arising at the end of this Technology Age will pass, too.

The Buddha also advised that we should see our bodies like the four elements: wind, fire, earth, and water. These elements of nature are constantly changing, yet when we observe them, we don’t struggle to try to make them remain stable. Water turns to ice. Fire burns earth to ash. Once a pebble is thrown into a lake, the reverberations on the surface are possibly endless.

You’ve heard that expression, “the winds of change” used to describe some geopolitical event, right? Well the winds of change apply to ourselves and our lives on an every-day basis, just as poignantly as to powerful people describing monetary moves, or a growing social sentiment.

Try replacing expectations with plans. Have goals and move toward them, but expect that things won’t go as you expect them to. Prepare for a varied list of possibilities in important situations. It is better to be over-prepared than under-prepared. But even the best preparation for life won’t eliminate the questions – as Rilke so profoundly suggested. Finally, observe your thoughts and feelings, and instead of placing your focus on the future – on some uncertain outcome – learn to live fully, happily in the now. Every second there will be a new one, so you’ll have lots of practice.

Living in the question means we all get to give ourselves a break. We get to acknowledge and embrace that we are growing, expanding, evolving spiritual beings fumbling along in a skin suit. Nothing will ever be chiseled in stone, so the more we can accept the “huh?” the better. When we develop the observer attitude, not knowing doesn’t seem so crazy after all.

“The important thing in our understanding is to have a smooth, free-thinking way of observation.  We have to think and to observe things without stagnation.  We should accept things as they are without difficulty.  Our mind should be soft and open enough to understand things as they are.  When our thinking is soft, it is called imperturbable thinking.  This kind of thinking is always testable.  It is called mindfulness.”
– Shunryu Suzuki, Zen Mind, Beginner’s Mind

“Conversation enriches the understanding, but solitude is the school of genius.”
– Edward Gibbon

There are two ways to live life.  Individuals can live in total awareness, like a newborn child who’s fully in tune and engaged with the full scale of their surroundings, which echoes wonder in every way shape or form.  Or, on the other hand, we can live in unawareness, where we are so detached where even the simplest things get by us.  This state is not unlike floating through life, like a leaf in the wind, letting life take you where it may.  In contrast, the opposite of that is the fish that is aware of its environment, and will swim with the tide when it’s advantageous, but will immediately change course and go against the tide when life demands it.

When individuals lack awareness, really simple things get by their defenses.  Examples of these are when we lose our keys, misplace our phone or the remote, forget an appointment, etc.  Each of these circumstances shows our lack of being in tune with our environments, which stems from being out of sync with our inner self.

On the opposite side of that spectrum lies awareness.

Awareness is walking outside, and noticing the warmth of the sun as it seeps through your skin; breathing in and feeling a full breath of fresh air as it goes fully into your lungs and feeling the energy it gives you; hearing how the birds chirp down the street even though the sound of traffic strains to override it; sensing someone’s emotions on a deeper level, even though you’ve only had a moment’s notice to pay attention to them; or even sensing something on instincts which would drift by someone if they weren’t paying attention.  All of these instances are felt deep down inside the individual, because they are aware.  But perhaps, one of the best ways to realize your awareness is locked in, like an athlete in the zone, is by being able to hear the stillness in your mind – the silence; full solitude.

In the silence we are capable of ascertaining more.  When the mind is cluttered, however, and filled to the brim, it is like a full cup of water, incapable of taking one more drop.  Worse, when merely one more drop of water gets added to the cup, the critical point arises where that one drop helps dislodge more than a magnitude of the single drop that went in, not unlike the person who faces one problem and has it spiral out of control into many issues.  Most of us including myself are probably familiar with these types of circumstances.  That is why pumping the breaks is crucial before we get to the point of no return.

Slowing down from our proverbial warp speed is when we as individuals are capable of understanding more, when we retain the maximum efficiency of our capabilities since we are fully engaged.   That very moment is when we are – as individuals – capable of functioning at a higher degree of understanding, a higher degree of knowing.  And one of the highest degrees of knowing is that of the self – that of your inner-most being.

It’s in the silence that our answers reside, in the stillness of the vacuum – in the solitude of life.

But don’t believe any of this; in fact, strive to disbelieve.  Seek your own answers – through every step of your life, throughout every breath, in full awareness, always.

“Loneliness is the poverty of self; solitude is the richness of self.”
– May Sarton

“Solitude is a place of purification.”
– Martin Buber

“The Monotony & Solitude of a quiet life stimulates the creative mind.”
– Albert Einstein

“It is easy in the world to live after the world’s opinion; it is easy in solitude to live after our own; but the great man is he who in the midst of the crowd keeps with perfect sweetness the independence of solitude.”
– Ralph Waldo Emerson, The Complete Prose Works

“A poet is a nightingale, who sits in darkness and sings to cheer its own solitude with sweet sounds.”
– Percy Bysshe Shelley

“We talk of communing with Nature, but ‘tis with ourselves we commune…Nature furnishes the conditions – the solitude – and the soul furnishes the entertainment.”
– John Burroughs

“To give thanks in solitude is enough.  Thanksgiving has wings and goes where it must go.  Your prayer knows much more about it than you do.”
– Victor Hugo

“The more powerful and original a mind, the more it will incline towards the religion of solitude.”
– Aldous Huxley

“Conversation enriches the understanding, but solitude is the school of genius.”
– Edward Gibbon

“Alone let him constantly meditate in solitude on that which is salutary for his soul, for he who meditates in solitude attains supreme bliss.”
– Guru Nanak

“Then stirs the feeling infinite so felt in solitude, where we are least alone.”
– Lord Byron

“Solitude us strength; to depend on the presence of the crowd is weakness.  The man who needs a mob to nerve him is much more alone than he imagines.”
– Paul Brunton

“I had three chairs in my house; one for solitude, two for friendship, three for society.”
– Henry David Thoreau

“One of the greatest necessities in America is to discover creative solitude.”
– Carl Sandburg

“Solitude is creativity’s best friend, and solitude is refreshment for our souls.”
– Naomi Judd

“Someone who’s awake in the middle of the night is a soul consciousness when everyone else is asleep, and that creates a feeling of solitude in poetry that I very much like.”
– Edward Hirsch 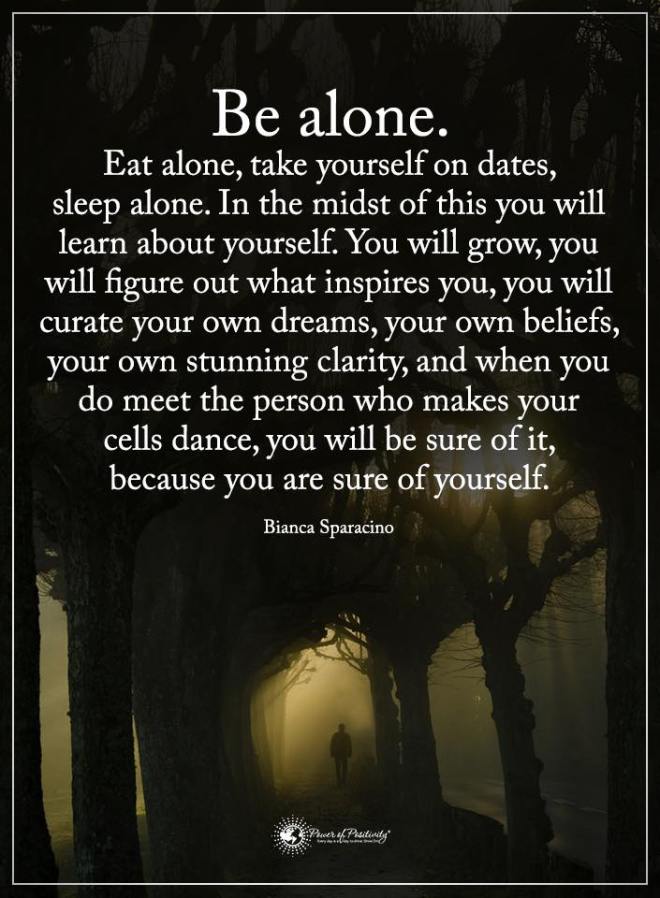