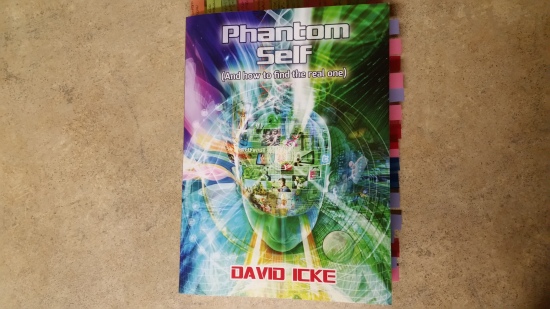 “Nothing is easier than self-deceit.  For what each man wishes, he also believes to be true.”
– Demosthenes

Icke’s work has come to be known as fascinating as it is wide-ranging, and for good reason.   The man will leave no stone unturned.  He’s not afraid of heading into places other people can’t even fathom, and many have come to appreciate this.

In Phantom Self, David Icke does a resounding job of not only showing various methods the system employs to carve out the consciousness from individuals, but he also shows the numerous facets the system has that play a role in making this process possible.

Throughout the book, Icke makes it a point from differentiating that we have two selves, the more superficial version of us that goes through life unaware of the deeper structure of life and reality, and the deeper level of conscious awareness that holds our unending potential, which is rarely tapped by individual.

Phantom Self showcases some of the previous information that Icke has shown, with good reason.  Much of this information is just as vital now, if not more so, as it was in the past.  And things have only gotten worse globally.

Readers of his previous work will be familiar with some of it.  Still, the information that Icke provides and how he distills it is vital to understanding how individuals and society will shed its shackles from the control grid as long as they take the appropriate action.

As an avid researcher, my one qualm with the book is that Icke doesn’t source all of his statements.  He does provide quite a few sources, but a lot of the information that he writes as ‘matter of fact’ would be much stronger if he at least buttressed those statements with how he came to those conclusions.  There’s nothing wrong with giving your opinions about a matter, and they surely might be facts mind you, however, in order for some people to visualize the extent of control and corruption they will need to see a roadmap.  A roadmap is made up of those signposts, and those signposts in research are sources.

Be that as it may, that last fact doesn’t detract from the book.  Phanton Self provides more than ample information for it to be worth one’s money.

How icke chose to conclude the book resonates quite well, and certainly makes a lot of sense.

Its through individual self awareness and realization of our deeper conscious state that we as individuals will be able to see that we are the solution to the system.

Aggression will not be the solution to overturning the system.  In fact, the opposite is the case.  The system is ready for aggression in more ways than most realize.  Once we realize the depth of the power of our true selves – the power of the love for another – we will be able to detach ourselves from the meaningless and head on a new path.

The system will be changed only by people removing their support from it in every way shape or form.  Then, and only then will we be able to birth a new process and reign in the beginnings on the morrow.

As Ghandi once said: