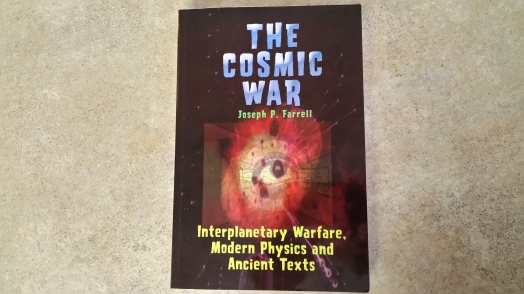 Dr. Farrell’s hypotheses of an Ancient Interplanetary War is argued in an in-depth, precise and reasonable approach.  The extensive evidence Farrell collates and synthesizes in this particular book will leave the reader aghast with the possibilities.

Intriguingly enough, many ancient cultures stated that the ‘Wars of the Gods’ were quite real.  Predictably, even though there’s extensive evidence for advanced physics, advanced weapons, ancient [millions and millions of year old artifacts found by reputable sources], the establishment has painted all over ancient history with the brush of ‘myth’.

“The term mythology stems from the Greek word mythos, simply meaning words or stories reflecting the basic values and attitudes of people.  In past ages, when the vast majority of humans were illiterate, easily understood parables were used to educate people about history, science, and technology.  During the Dark Ages, when most of people were taught that the Earth was flat, the word mythology was changed by the Roman Church to mean imaginative and fanciful tales veering far from truthfulness.  This small change in semantics has caused untold damage in current perceptions.”[1][Emphasis Added]

Ironically enough, there is starting to be more and more evidence of ‘myths’ now turning out to be fact.

As Chris Hardy Ph.D remarks in her poignant book DNA Of The Gods:

“…let’s remember that, before the discoveries of loads of ancient tablets written in the pictographic Sumerian language (Late Uruk period, fourth millennium BCE), the kingdom of Sumer was believed to be a myth.  We had already discovered Akkad and deciphered Akkadian, and still archaeologists wouldn’t give credence to the numerous carved references, within historical dated records, to a line of kings whose title was “King of Sumer and Akkad“.[2][3][Emphasis Added]

Or how about the “myth” of Troy:

“This myth collapsed in 1865 with archeologist Frank Calvet’s discovery of the historic ruins of not only one city of Troy but nine layers of it!  The city, whose siege is recounted in Homer’s Iliad, is only Troy VII, the seventh level underground, dating to the thirteenth century BCE.”[4][Emphasis Added]

“…according to geologist Robert Schoch, who, in 1990, worked with the renowned pioneer Egyptologist John Anthony West, the vertical erosion of the Sphinx was due to heavy and extensive rainfall that happened in the region between 10,000 and 5,000 BCE, thus dating the Sphinx’s construction to at least 7,000 to 8,000 years ago ) according to Schoch’s conservative estimate).  What was the reaction of conventional archaeologists?  Here is one: Zahi Hawass, Director General of Giza, was asked in an interview on the PBS series NOVA if it was possible that a more ancient civilization might have built the pyramids and sculpted the Sphinx.  Hawass replied: “Of course it is not possible for one reason…No single artifact, no single inscription, or pottery, or anything has been found until now, in any place to predate the Egyptian civilization more than 5,000 years ago.”[4]

That last passage in particular showcases the inherent dogma that we as a society have had to deal with.

The gatekeepers, for many reasons, want to keep established history in a nice little box.  Fortunately, as anyone who has extensively research these topics know, there’s more than ample evidence that shows that at minimum history isn’t what we have been told.

In any case, Cosmic War covers wide ranging but pertinent topics such as Van Flandern’s exploded planet hypothesis, an analysis of plasma in relation to weapons that employ scalar physics, petroglyphs which show plasma instability glyphs that were recorded by ancient cultures, remnants of giants in ancient history, optical phase conjugation, the story of the ‘gods’ as related through ancient texts, pulsars, generational charts of the ‘gods’, the scarring of The Valles Mariners being possibly from a weapon, Iapetus and its hexagonal craters, and a LOT more.

Another notable component that Dr. Farrell covers is the ‘Epic Of Ninurta’.  In The Cosmic War, the Epic of Ninurta is shared in full, and analyzed methodically. Dr. Farrell estimates that the ‘Epic’ of Ninurta is in fact nothing but an inventory of the technologies that were recovered from the losing side in the war.  If such is the case, there’s more to this story than meets the eye.

The ramifications of this book abound, and filter in all aspects of our lives.  Dr. Farrell gives is more reasons [coupled with countless others in his other trenchant books] as to why we need to give history, particularly ancient history, a very long and thorough look.