You know Tylenol can relieve a headache, but are you aware it can cause other side effects, such as increased risk of death or heart toxicity?

Have you ever popped a Tylenol to push through that annoying headache and get on with your day? Most of us have. Each week, millions of Americans take one of the 600 medicines that contain acetaminophen, Tylenol’s active ingredient, for various aches and pains. Acetaminophen is the most common drug ingredient in the US, but this ‘harmless drug’ is linked to over 110,000 injuries and deaths per year.

How can Tylenol, which is doled out like candy, be bad for you? Amazingly, no one really knows how acetaminophen works [1], but people do know that this drug gets to your brain. Tylenol in your brain is concerning because it depletes glutathione [2], an antioxidant that is especially necessary for brain health. Our bodies depend on antioxidants to balance oxidative damage and inflammation. If you’re popping a Tylenol with your morning antioxidant-rich KB Smoothie, Tylenol may rob you of the smoothie’s benefits!

Most people have heard that Tylenol can damage the liver (has anyone ever drunkenly warned you to take a Motrin, not a Tylenol, to prevent a hangover?). But since everything in our bodies is connected, it’s not surprising that Tylenol can do damage beyond your liver. A recent study showed that people who took Tylenol had increased risks of death, heart toxicity, gastrointestinal bleeding, and kidney damage [3]. Importantly, people who took more Tylenol suffered more damage.

It’s also scary how Tylenol affects mood. After swallowing 1000 mg of Tylenol, people exhibited less empathy and blunted positive emotions. For reference, 1000 mg is two extra-strength Tylenol tablets, and the ‘safe’ range is 3000 mg per day. This means that popping two Tylenols can affect you physically and emotionally!

If you’re pregnant or looking to become pregnant, please be especially careful about taking Tylenol. Research has shown that children exposed to acetaminophen in the womb had behavioral, communication, and motor skill problems. Another study linked prenatal acetaminophen exposure with increased ADHD-like behaviors and medication use.

What about other painkillers?

Hopefully you’re convinced to think twice before taking a Tylenol, but what about other pain-relievers like Motrin, Aleve, or Advil? These non-steroidal anti-inflammatory drugs (NSAIDs) must be safe, since thirty million people take them every day! Not so fast…

Women who recognize the importance of hormonal balance should be wary. NSAIDs can mess with ovulation, especially progesterone levels, after only 10 days of use [4]. Additionally, NSAIDs injure the small intestine; in one study, 71% of NSAID users showed small intestinal damage, compared to 10% of non-users [5]. Damaged intestines can lead to intestinal permeability, or “leaky gut.” Leaky gut has been linked to depression, ADHD, and allergies.  NSAIDs can cause leaky gut [6] and harm your microbiome, the trillions of beneficial bacteria that live in and on us. Disrupting our bacteria can do more damage than we realize!

How can I relieve my headache?!

Now that you know the surprising dangers of Tylenol and other NSAIDs, what should you take for headaches and other aches and pains? Turmeric, the yellow root found in curry powder, contains a powerful anti-inflammatory and pain reliever called curcumin. This has been used in Ayurvedic and Chinese medicine as a treatment for pain, digestive disorders, and wound healing for centuries. Many studies show the beneficial effects of curcumin; curcumin works as well as ibuprofen to alleviate pain from knee osteoarthritis [7] and PMS [8]. Next time you have a headache, try 1-2 grams of curcumin – or a turmeric latte!

Dr. Brogan is boarded in Psychiatry/Psychosomatic Medicine/Reproductive Psychiatry and Integrative Holistic Medicine, and practices Functional Medicine, a root-cause approach to illness as a manifestation of multiple-interrelated systems. After studying Cognitive Neuroscience at M.I.T., and receiving her M.D. from Cornell University, she completed her residency and fellowship at Bellevue/NYU. She is one of the nation’s only physicians with perinatal psychiatric training who takes a holistic evidence-based approach in the care of patients with a focus on environmental medicine and nutrition. She is also a mom of two, and an active supporter of women’s birth experience. She is the Medical Director for Fearless Parent, and an advisory board member for GreenMedInfo.com. Visit her website. 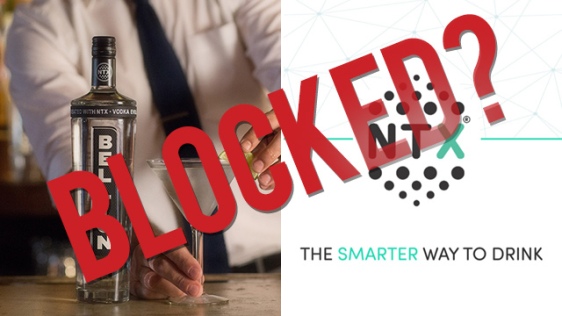 There are all sorts of ways the federal government actively poisons the population:

• The FDA keeps cancer causing additives in the food supply.

• The CDC pushes toxic vaccines laced with mercury… even when that mercury gets injected into children in California.

And now there’s a new one you’ve probably never heard of. I’ve recently learned that the U.S. federal government is actively blocking the public from learning about an herbal molecule from licorice root that can be added to alcoholic beverages to dramatically reduce the liver toxicity caused by alcohol consumption.

The liver protective effects of this plant-based molecule are astonishing, yet the TTB (which regulates alcohol) is demanding this molecule be censored from public knowledge and not mentioned on alcohol labels.

Why isn’t NTX allowed to be touted on alcohol beverage labels?

The trade name for the molecule is “NTX” and it’s a combination of a licorice root extract plus a functional sugar molecule, both derived from nature. It has already been awarded a patent as a liver protective substance (U.S. Patent Office patent #9,149,491), and it has the potential to help prevent tens of thousands of acute liver toxicity cases each year that are derived from alcohol consumption. Yet the federal government is going out of its way to make sure the U.S. public never hears about this.

It’s astonishing. The same government that drips toxic fluoride into the water supply under the false pretense that it’s all for “public health” refuses to allow alcoholic beverage manufacturers to label their products as containing this powerful protective herbal extract that prevents liver damage.

Consider this: If alcohol could be made safer to drink, why wouldn’t the government want everyone to know about that? Covering up this remarkable breakthrough is the equivalent of the federal government outlawing air bags, seatbelts or anti-lock brakes on automobiles.