Could your wealth be hacked? It’s a threat most investors overlook. But they do so at their own peril.

If elections can be hacked, then so can bank and brokerage accounts, as well as any online platforms for digital currencies.

According to the Guardian, “An investigation by the FBI has concluded that Russian hackers were responsible for sending out fake messages from the Qatari government, sparking the Gulf’s biggest diplomatic crisis in decades.”

The Russian government has repeatedly denied involvement in these hacking campaigns. Regardless of whether the news about Russian hackers is fake, the threat of cyber attacks is very real.

In recent months, major e-mail providers and e-commerce sites have been hit by hackers. They often take customers’ information and try to sell it on the dark web.

Think Bitcoins are “hack proof” due to cryptography? Think again. Tens of millions of dollars worth of the crypto-currency have been digitally stolen by hackers. The biggest heists hit Bitcoin exchanges Mt. Gox and Bitfinex. More recently, South Korean Bitcoin exchange Yapizon was hacked out of more than $5 million.

Electronic Banking Is Vulnerable to Hackers

Electronic banking and brokerage institutions are also vulnerable. A rogue government, a group of terrorists, or even a lone mischievous teenager could potentially crash markets by unleashing a debilitating computer virus or breaking into networks that undergird the financial system.

If the Internet goes dark, then so does Bitcoin and other digital platforms. No online banking. Your ATM card may no longer work. A national “bank holiday” may have to be declared as a physical cash shortage sends the economy reverting to barter transactions.

Granted, this is an extreme scenario. But you don’t have to take extreme measures in order to protect yourself from it.

Reducing Your Vulnerability to Cyber Attacks: Simple Steps You Can Take

One of the most important steps to take to boost your resilience to digital threats is to hold tangible assets that aren’t dependent on, or connected to, the internet. Physical precious metals are a time-tested form of unhackable money.

Virtual ownership of metals in the form of futures, options, or exchange-traded products will leave you vulnerable to any of the major threats to the financial grid.

The upshot to owning low-premium bullion products you can hold in your hand is that it costs you nothing extra to obtain the protection and utility that physical metals provide.

We’re not suggesting that you pull everything out of your bank accounts and close all your credit cards – for now, they remain a convenience most of us won’t want to do without in our daily lives. (And we’re not saying to steer completely clear of cryptocurrencies either.)

But you can and should take steps to make your accounts at least somewhat more secure:

For the portion of your wealth you want to secure in physical, off-the-grid metal, make sure you keep it far removed from the banking system. That means not storing your precious metals in a bank safe-deposit box that could be raided or rendered inaccessible during a financial crisis.

Keep at least some portion of your gold and silver stash stored in a home safe for immediate accessibility at all times. And keep quiet about it! Your neighbors don’t need to know all about your pure silver bars or your shiny gold Krugerrands.

For the portion of your precious metals holdings you don’t want to keep at home, opt for a secure bullion storage facility such as Money Metals Depository.

MMD only uses physically segregated storage which ensures your metals aren’t pooled or co-mingled with those of other customers.

Even as new and potentially bigger cyber threats emerge, you can rest comfortably knowing much of your wealth is beyond the reach of hackers. That peace of mind is difficult to put a price on. Fortunately, it’s not difficult to obtain. Rotating wealth out of financial assets and into hard assets is as easy as writing a check to a reputable bullion dealer such as Money Metals Exchange.

Stefan Gleason is President of Money Metals Exchange, the national precious metals company named 2015 “Dealer of the Year” in the United States by an independent global ratings group. A graduate of the University of Florida, Gleason is a seasoned business leader, investor, political strategist, and grassroots activist. Gleason has frequently appeared on national television networks such as CNN, FoxNews, and CNBC, and his writings have appeared in hundreds of publications such as the Wall Street Journal, TheStreet.com, Seeking Alpha, Detroit News, Washington Times, and National Review. A few days ago I blogged about an article from Israel which cited Russian sources that believe the crash of its airliner at Sochi last Christmas was a deliberate take down brought about by some sort of special “radio” means. Before you dismiss that idea entirely, consider this story shared by Mr. J.H.:

Granted, this story appeared in 2015, but in the context of my speculations about a new “international Mafia War” hypothesis that I advanced in last year’s Dec 29th News and Views from the Nefarium and this week’s earlier speculations regarding the crash of the Russian Tu-154 outside of Sochi, this is a story worth revisiting here. Consider the implications of the following statements in the article:

The weapon in question: Boeing’s “CHAMP,” short for Counter-electronics High-powered Microwave Advanced Missile Project. It’s essentially the old nuclear electromagnetic pulse weapon that we used to worry so much about — but without the nuclear part. CHAMP carries a small generator that emits microwaves to fry electronics with pinpoint accuracy. It targets not nations or cities but individual buildings, blacking out their electronics rather than blowing up physical targets (or people).

What makes CHAMP even more interesting is that, unlike a nuclear electromagnetic pulse weapon, which fires once, blacking out entire nation-states, CHAMP can fire multiple times, pinpointing and blacking out only essential targets. This would permit, for example, taking down radar defenses in a hostile state while saving the electrical grid that supports the civilian population. In a 2012 test flight in Utah, a single CHAMP was reported to have blacked out seven separate targets in succession, in one single mission.

And then there’s this even more relevant admission:

Even back then, a Boeing representative was able to boast: “We hit every target we wanted to,” predicting further that “in the near future, this technology may be used to render an enemy’s electronic and data systems useless even before the first troops or aircraft arrive.” Four years later, that future has arrived. Air Force Research Laboratory commander Maj. Gen. Tom Masiello says CHAMP is “an operational system already in our tactical air force.”

It takes little imagination to envision that this technology could be mounted on almost anything, from drones, to ships, trucks or vans, and so on, and even in manueuverable space satellites, and that it could be modified to track and target moving targets, such as aircraft.

All of this raises the possibility that those Russian sources speculating that their aircraft was brought down by “radio” means – i.e., something operating in the microwave frequency range of the spectrum – are in all likelihood basing their analysis in part on a knowledge of American electromagnetic weaponry capabilities. In other words, the article raises the possibility of a deliberate downing of the Russian aircraft out of the range of fiction and speculation into a very real world possibility. Similarly, it suggests a similar technological capability on Russia’s part may lie behind the USS Donald Cook incident.

If my ‘International Mafia Wars” scenario be true, then one may also expect that certain “extra-national” players may have a similar capability, and this means that…

Dr. Arthur T. Bradley Ph.D. author of Disaster Preparedness For EMP Attacks & Solar Storms [See Review Here] walks through the testing of metal garbage cans and anti-static bags against a RF energy from an EMP. Recommendations include how to properly seal the cans and which bags offer best protection. 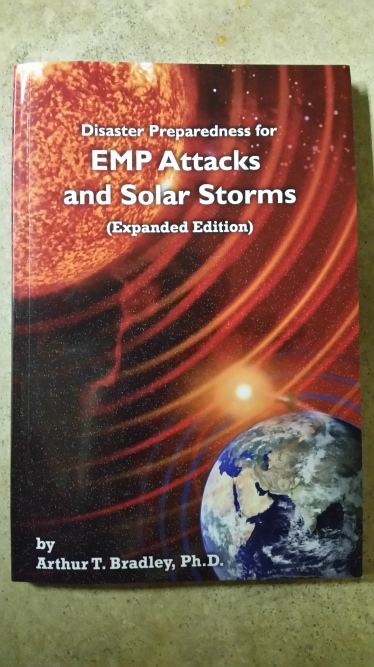 The subject of EMPs/Solar Storms, as the author makes a it a point to allude to, is merely one component of a more robust preparation plan.

No, this book is not about doom and gloom, or the end of the world. This book, is however, about the very realistic fact that solar storms do and have taken place, and EMP [electromagnetic pulses] are a realistic concern/threat among many high-level individuals.

Many people scoff at the notion of having knowledge of preparedness and these are the same people that will literally spend thousands of dollars yearly on all types of insurances, for things they will in all high probably likely never use. That’s how the Insurance Companies make money, you know.

Ironically, the mere mention in some circles of a month’s worth of food – that you’re going to eat anyways, and thus not incur any additional financial cost like “real insurance” – makes some believe that certain preparedness principles are far out there. The reason? With TV Shows & Media that do nothing but marginalize individuals that are into preparedness, it’s no wonder the lot of the populace is brainwashed on the subject. And yet, all of our ancestors practiced – as they had too – prudent preparedness in the past. Don’t believe me? How was food stored over the winter? It was canned and stored in a myriad of ways, among other things. It had to be, if not, you might eat less, or might not eat. It was certainly stored other ways as well. That shows a very practical precedent for general preparedness.

In any case, this book is more of an advanced tier into preparedness, but a needed one nonetheless.

Disaster Preparedness For EMP Attacks & Solar Storms by Arthur T. Bradley Ph.D is a rather swift read. It should take no more than 2-3 hours tops, or even quicker if you know many of the topics already covered.

The book is rather incisive in that it cuts through much of the BS that is out there online in regards to protection in mitigating EMP/Solar Storms. This is my favorite part of the entire book.

In a rather comprehensive way, this book addresses all areas of concern individuals interested in preparedness should be pondering. That is very helpful especially if you are a beginning prepper and just managed to jump into this topic.

Out of all preparedness subjects, an EMP/Solar storm threat is one of those issues that is extremely unlikely to happen, and yet, it’s quite possible especially when extreme solar activity and solar storms are taking place.

It really doesn’t take a lot to get prepared if you do it right. There is much misinformation/disinformation out there in regard to these subjects. This is one great reason why this book stands out.   Bradley goes straight to the point, and keeps it practical while not also overdoing it.

All in all, this book is a vital component for individuals interested in general preparedness.

That being said, before jumping on this book, people should probably make sure they have other more likely areas of concern [more possible/common areas]- such as earthquakes, tornadoes [we live in Tornado alley here], hurricanes, etc. – addressed.

Bradley makes his case with sound, verifiable and meaningful information that is sorely lacking in many other disciplines.   This can see throughout the entirety of the book, and only serves to buttress the information provided by the author.

The book even showcases a table that is very useful which outlines the shielding effectiveness of various enclosures.

While not in most people’s most likely scenarios to happen – and rightly so – EMPs/Solar Storms are something to keep in mind. If you think this book might help you, then by all means give it a consideration. The book is definitely high quality work for such an abstruse subject.

98.6 Degrees – The Art Of Keeping Your Ass Alive, by Cody Lundin
The Survival Medicine Handbook – A Guide For When Help Is Not On The Way, By Joseph Alton M.D. & Amy Alton A.R.N.P.