“Censorship is telling a man he can’t have a steak because a baby can’t chew it.”
– Mark Twain* 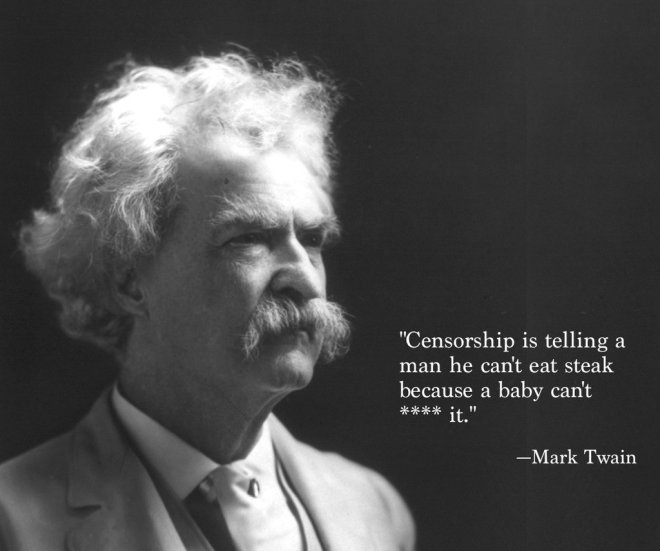 “It’s easier to fool people than to convince them that they have been fooled.”
– Mark Twain 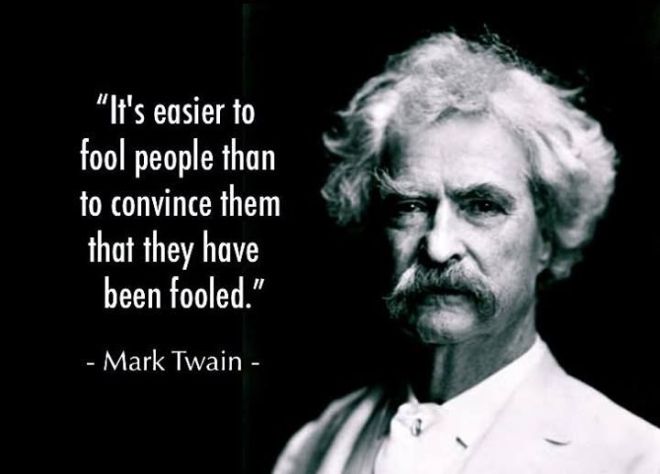 The Whole Foods corporation deliberately deceives its consumers by making false, fraudulent claims that its stores sell “Nothing artificial, ever” when, in reality, Whole Foods Market stores are filled with artificially engineered food crops (GMOs) which, to this day, remain unlabeled.

As this mini-documentary reveals, Whole Foods CEO Walter Robb has mastered the language of healthy eating and sustainability in order to deceive Whole Foods consumers into thinking his company is acting in their best interests. Yet behind the scenes, Whole Foods was a major force behind the pushing of the Monsanto-inspired anti GMO labeling law that President Obama just signed.

Now, thanks to the efforts of Whole Foods and Monsanto, all GMO labeling laws across America have just been obliterated, replaced by a federal non-labeling scheme that will financially benefit both Monsanto and Whole Foods. See SELL OUT: Whole Foods partners with Monsanto to endorse fake GMO-labeling bill that’s actually an ANTI-labeling bill with zero penalties for non-compliance.

What Whole Foods and Monsanto have in common is that they both benefit from the deception of selling unlabeled GMOs to unwitting consumers.

We are going to see what happens to a person’s thoughts/beliefs when they are presented with a constant barrage of certain type of information by the mainstream media.

In his groundbreaking book, Thinking, Fast And Slow, Nobel Prize Winner Daniel Kahneman takes a gander at some research conducted by his colleagues Slovic, Lichtenstein, and a former student Fischhoff.

Kahneman goes on to cover the landmark research conducted by the above individuals in relation to “public perceptions of risks, including a survey that has become the standard example of an availability bias.”

For clarification purposes, in plain-speak, an availability bias is when individuals are influenced by circumstances/events/ideas that have taken place more recently due to availability – such as a report in the media being widespread and ubiquitous.  This therein skews the actual decision making process of individuals.

Continuing on, Slovic, Lichtenstein & Fischhoff “asked participants in their survey to consider pairs of causes of death: diabetes and asthma, or stroke and accidents.  For each pair, the subjects indicated the more frequent cause and estimated the ratio of the two frequencies. The judgments were compared to health statistics of the time.  Here’s a sample of their findings:

-Stroke cause almost twice as many deaths as all accidents combined, but 80% of respondents judged accidental death to be more likely.
– Tornadoes were seen as more frequent killers than asthma, although the latter cause 20 times more deaths.
-Death by lightning was judged less likely than death from botulism even though it is 52 times more frequent.
-Death by disease is 18 times as likely as accidental death, but the two were judged about equally likely.
-Death by accidents was judged to be more than 300 times more likely than death by diabetes, but the true ratio was 1:4

The lesson is clear: estimates of causes of death are warped by media coverage.  The coverage is itself biased towards novelty and poignancy.”[1][Emphasis Added]

“Unusual events (such as botulism) attack disproportionate attention and are consequently perceived as less unusual than they really are.  The world in our heads is not a precise replica of reality; our expectations about the frequency of events are distorted by the prevalence and emotional intensity of the messages to which we are exposed.” [2][Emphasis Added]

As the cited examples above showcase, people’s reality structure can be overwhelming warped – especially when coupled with fears – by how much coverage a certain subject gets by the mainstream media.

Could that also apply to the disconcerting topic of terrorism?  Quite so.

Since 9/11, terrorism in its many shapes and forms, has become an omnipresent issue throughout society.   Has that that threat of terrorism been overstated?   Let’s find out.

In fact, years ago it was found that ” the leading cause of deaths for Americans traveling abroad is not terrorism, or murder … or even crime of any type.

With the exception of the Philippines, more Americans died from road crashes in all of the 160 countries surveyed than from homicides.

The U.S. Department of State reports that only 17 U.S. citizens were killed worldwide as a result of terrorism in 2011. That figure includes deaths in Afghanistan, Iraq and all other theaters of war.

In contrast, the American agency which tracks health-related issues – the U.S. Centers for Disease Control – rounds up the most prevalent causes of death in the United States:

Comparing the CDC numbers to terrorism deaths means (keep in mind that – from here to the end of the piece – we are consistently and substantially understating the risk of other causes of death as compared to terrorism, because we are comparing deaths from various causes within the United States against deaths from terrorism worldwide):

– You are 35,079 times more likely to die from heart disease than from a terrorist attack

– You are 33,842 times more likely to die from cancer than from a terrorist attack

The annual number of deaths in the U.S. due to avoidable medical errors is as high as 100,000. Indeed, one of the world’s leading medical journals – Lancet – reported in 2011:

A November, 2010, document from the Office of the Inspector General of the Department of Health and Human Services reported that, when in hospital, one in seven beneficiaries of Medicare (the government-sponsored health-care programme for those aged 65 years and older) have complications from medical errors, which contribute to about 180 000 deaths of patients per year.

Preventable medical mistakes and infections are responsible for about 200,000 deaths in the U.S. each year, according to an investigation by the Hearst media corporation.

And a new study published in the Journal of Patient Safety says the numbers may be up to 440,000 each year.

Let’s ask the question again: has the threat of terrorism been overstated?

What do you think?

Given that we have learned that that are many more greater threats to our lively hoods, not only should society not be as fearful regarding terrorism propaganda that the mainstream media exacerbates, but the real problems we should be concerned about – like for instance the likelihood of dying from medical mistakes – are severely underreported.

This is quite disconcerting given how many people over estimate the quality of health in the united states, even though its nowhere near the top country in health in the world.

What the above information shows is that if the individual is not careful, not only will their view of the world be quite distorted, but the information that they should be looking into will be completely overlooked.

Let this be a word of caution for those who are quick to trust the mainstream media – or any other media for that matter including this one.

Always, always, always verify the information, and make sure not to attach emotion to it.

Be open-minded, but skeptical.

Remember, we’re responsible for what goes in our minds.  Let make sure its quality information.

As a preamble, the video below has many salient points which are noteworthy.  That being said, am not in agreement with everything stated; however, Yuri Bezmenov’s POV is integral into understanding how we America shifted into a new direction over the last few decades.

Also, given the amount of power players behind the scenes, things have only gotten vastly more complicated in society due to all the governments/institutions/agencies/secret societies/breakaways vying for power, so things haven’t gone exactly as he has stated.  Much of what he stated decades ago is coming to pass though.

This is G. Edward Griffin’s shocking video interview, Soviet Subversion of the Free-World Press (1984), where he interviews ex-KGB officer and Soviet defector Yuri Bezmenov who decided to openly reveal KGB’s subversive tactics against western society as a whole.

Bezmenov explains how Jewish Marxist ideology is destabilizing the economy and purposefully pushing the U.S. into numerous crises so that a “Big Brother” tyranny can be put into place in Washington, how most Americans don’t even realize that they are under attack, and that normal parliamentary procedures will not alter the federal government’s direction.

He then explains how Marxist leaders use informers to make lists of anti-Communist and other politically incorrect people who they want to execute once they – actually a Jewish oligarchy – come to power. The oligarch’s secret lists include “civil rights” activists and idealistically-minded “useful idiot” leftists as well.

Bezmenov provides several real world examples of how Marxist leaders even execute and/or imprison each other. Also he explains how American embassy employees were known to betray Soviets attempting to defect, how there existed a “triangle of hate” in the Soviet government, why he realized that Marxism-Leninism was a murderous doctrine, and how the CIA ignored (or didn’t care) about Communist subversion.

He also mentions that revolutions throughout history are never the result of a majority movement, but of a small dedicated and highly-organized group who seize power, whether for good or bad. Next he explains how the American mass media spread lies about life in the Soviet Union.

Bezmenov also explains how the LOOK magazine article falsely claimed that the Russian people were proud of their victory in the Second World War, where in reality the Judeo-Bolshevik-Communist-Marxist government was happy that Hitler had been defeated so that they could remain in power.

Find out how the KGB utilized various individuals to undermine the Western society in its morals and values.