Hitch Your Wagon To The Stars

Today we take on one of the largest philosophical mysteries; what Dr. Farrell [GizaDeathStar.com] refers to as the Topological Metaphor. In a roller coaster of a talk, we touch many aspects and derivatives of this fundamental structure of existence – historically, esoterically, theologically & politically. What is this fingerprint of Creation? Where do we find its traces? How is it best grasped through symbolism, numbers, music & geometry? Was it part of a prehistoric understanding? How does modern science relate to it? How is this open abundance system opposed to the closed scarcity system? And we learn about the first Unified Field Theory in known history!

The Hidden Pattern of Creation (Part 1 & 2) – A Conversation with Joseph Farrell (S06P02)
© Forum Borealis. May not be reproduced in any commercial way.

FORUM BOREALIS = in depth conversations with the most interesting and important authors, researchers, & thinkers of today, who’s work often overlaps in areas including :

Our shows are gratis & free from ads for your listening pleasure. Sponsors have first access to them as mp3s on our website: http://www.forumborealis.net

(To read about Jon’s mega-collection, Exit From The Matrix, click here.)

This an excerpt of an introduction I wrote to my second collection, Exit From the Matrix:

…Make the only solution a global solution.

Of course, “global solution” means the individual is cut out of the equation, he doesn’t count, he doesn’t mean anything in the larger scheme of things, he’s just another pawn and cipher to move around on the board.

And as more duped and deluded people sign on to this agenda, the whole concept of the individual shrinks and becomes irrelevant.

This is the script for the future: in many ways create problems whose only solution appears to be collective.

Psychologically, mentally, emotionally, and spiritually divert the individual’s attention from his own vision, his own profound desires, his own consciousness, his own imagination—and place it within The Group (“all of humanity”).

Propagandize the idea that, if the individual concerns himself with anything other than The Group, he is selfish, greedy, inhumane. He is a criminal.

More and more, this is how the young are being trained these days.

The grand “we” is being sold to them like a cheap street drug. They buy in. They believe this “we” is real, instead of a hollow con designed to drag them into a Globalist framework owned and operated by mega-corporations, banks, foundations, governments, and ubiquitous Rockefeller interests.

And what of the individual, his mind, his unique perception, his independent ideas, his originality, his life-force?

Swept away in the rush toward “a better world.”

I have breaking news. Earth is not a spaceship and we are not crew members. If Earth is a spaceship, it has serious design flaws, because it keeps making the same trip around the same sun every year.

Each one of us does not have a specified function, as a crew member would.

In recent human history, a different idea emerged: establish severely hamstrung government, in order to protect the individual against it.

This idea existed in its pristine form for about an hour after the ink dried on the founding documents.

But regardless of circumstances, the individual can author his own freedom and what it implies. He can discover, within himself, extraordinary possibilities and extraordinary consciousness. He can contemplate what it means to create reality that expresses his most profound desires. 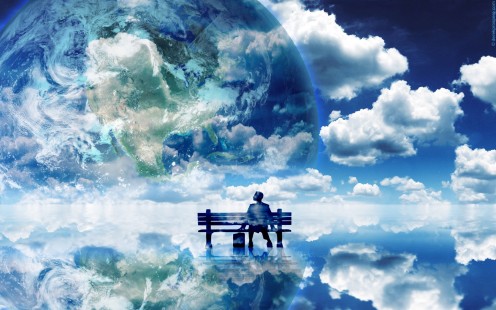 Long ago, in another life as a student, the answer to that question was never clear to me, nor did I even consider the question, because I was busy trying to make sense of the history of Western philosophy.

But in the decade-long lead-up to authoring my three Matrix collections, the question became very important. It split into two parts:

Was the ultimate in consciousness something a person plugged into, like a cosmic lamp, a reality that was already sitting there, waiting to be discovered?

Or was it something a person invented?

The second alternative, of course, is not a popular position.

Herds and flocks and squads of people are on the move, searching for the cosmic lamp. Or they’re avidly plugging themselves into some familiar religion or spiritual system.

They’re looking for authoritative content, the way an archeologist looks for a lost city, or on a lesser level, the way a chef looks for the best recipe for gnocchi.

However, the primary fact about consciousness is that it is creative, and the next most important fact is that it isn’t really looking for answers that already exist.

Looking for answers which are already there is built on a misconception. (Refer back to the primary fact above.)

Consciousness imagines, creates, invents. It may delude itself into thinking that what it creates was already there, but that illusion can be seen through.

Most people are not up to contemplating the idea of consciously creating, much less spontaneously improvising, which involves a kind of merging with what they would create.

But for those who can grasp such an idea, the world and the universe aren’t any longer arbiters and rule makers and guides. They are inventions that are already here.

Imagination…
Can Imagine Nations…
As cells within a Universe…
Where You and I Verse …
At the University …
Thence muse, within Universe Cities
And detach a bit yonder…
Thus, we go on and wonder…
…about the meanings of life..
And how synchronicities are rife…
With the greatest of rapture…
When we go recapture…
All that’s beyond our vision …
Like a intensely soft submission….
To all that is mind-numbing, yet real…
Like when consciousness reveals…
Our real eyes…
That realize…
Real lies…
that unseal cries…
and often crystallize…
Where the profound inner sanctum is found…
Thence promptly then unbound …
Slowly towards infinity …
Wholly spawning affinities…
A Youniverse of possibilities …
Where we dream, manifest …
Of worlds not oppressed…
Thence journey on a quest..
Where there is ceaseless freedom…
Those shadows? We don’t need ’em …
To the gallows we’ll thus feed ’em …
Because they really wouldn’t treasure …
What they really couldn’t measure …
What is priceless; what has meaning…
And they kept on falsely leaning…
On all truly material …
Rather than the wondrous ethereal…
That helps us feel surreal …
That shows life’s true bliss…
As we all journey on through this…
Door way of our soul …
Finding out what makes us whole …
Reaching now the door way…
We go my way? We go your way?
Our key – Imagination …
You’re free – endless creation…

Warped blue-pill realities methodical tear
Through vaults of emotion in all extremes
True virtuous individuals, is very much rare
As it most always is with tyrannical dreams

We are attacked relentlessly from all sides
Yet our mind expands – a bastion, ironclad
Psychological attacks all deflected in strides
That would usually drive stalwart men mad

Melting the chains, time to start adventures
To follow y/our dreams – endless imagination
Ruminate slowly about where then to venture
A free individual’s dream is of boundless creation