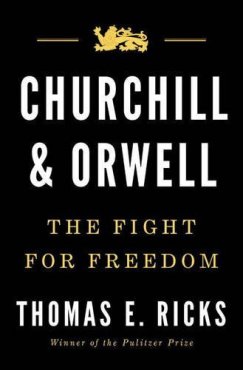 “In a time of deceit telling the truth is a revolutionary act.”

“Political language…is designed to make lies sound truthful and murder respectable, and to give an appearance of solidity to pure wind.”
– George Orwell

In Churchill And Orwell, Thomas E. Ricks does an apt job of juxtaposing two of history’s pillars of freedom – Winston Churchill and George Orwell, whose real name is Eric Arthur Blair.

The author follows the lives of these men through the 30s and 40s with lucidity, while comparing and contrasting key elements of these stalwarts of critical thought and independence.

Though both men were incisive writers that did not overlook the power of the written word, each man went through his own trials and tribulations that helped mold who they became.  Those life lessons they learned helped each become staunch supporters of freedom and individuality in a world that sought then, as it still seeks now at times, to conform individuals at nigh every turn.

With a critical eye to the unique path these men have walked, the author sagely states that their path:

“… is a path we should all strive for if we are to preserve the right to think, speak, and act independently, heeding the dictates not of the state or of fashionable thought but of our own consciences.  In most places and most of the time, liberty is not a product of military action.  Rather, it is something alive that grows or diminishes every day, in how we think and communicate, how we treat each other in our public discourse, in what we value and reward as a society, and how we do that.”[1]

Such a compelling statement beckons rumination for those that value freedom.   Freedom isn’t something that’s merely handed down, but an idea that’s alive, fluid, wholly able to grow or whither depending on how it is treated.

As such, given the totalitarian train of tyranny and fascism that is barreling down the pike, it would be wise to reap wisdom from these prescient pillars of the past, whilst also contemplating what Freedom truly means to us.

If the past is any indication of the future, and we certainly know that it is, then given the cyclic nature of history and man’s inability to learn from the past, then it is only a matter of time before we are waist deep in the very totalitarian and tyrannical issues that both Churchill and Orwell fought to prevent.

This makes learning our history and from those that stood before us and fought the good fight an imperative.  If not, humanity is merely choosing the path of ignorance once again.

Churchill & Orwell: The Fight For Freedom is an evocative read, made all the more relevant by the rise in tyranny and censorship that seeps further into society.  The courage Churchill and Orwell brought to bear in the fight for freedom was immeasurable, just as their wisdom is timeless.  To ignore their words and actions would be unwise, and if we do that, we do that at or own peril.

His other blog, BreakawayConsciousnessBlog.wordpress.com features mainly his personal work, while TheBreakaway.wordpress.com serves as a media portal which mirrors vital information nigh always ignored by mainstream press, but still highly crucial to our individual understanding of various facets of the world.