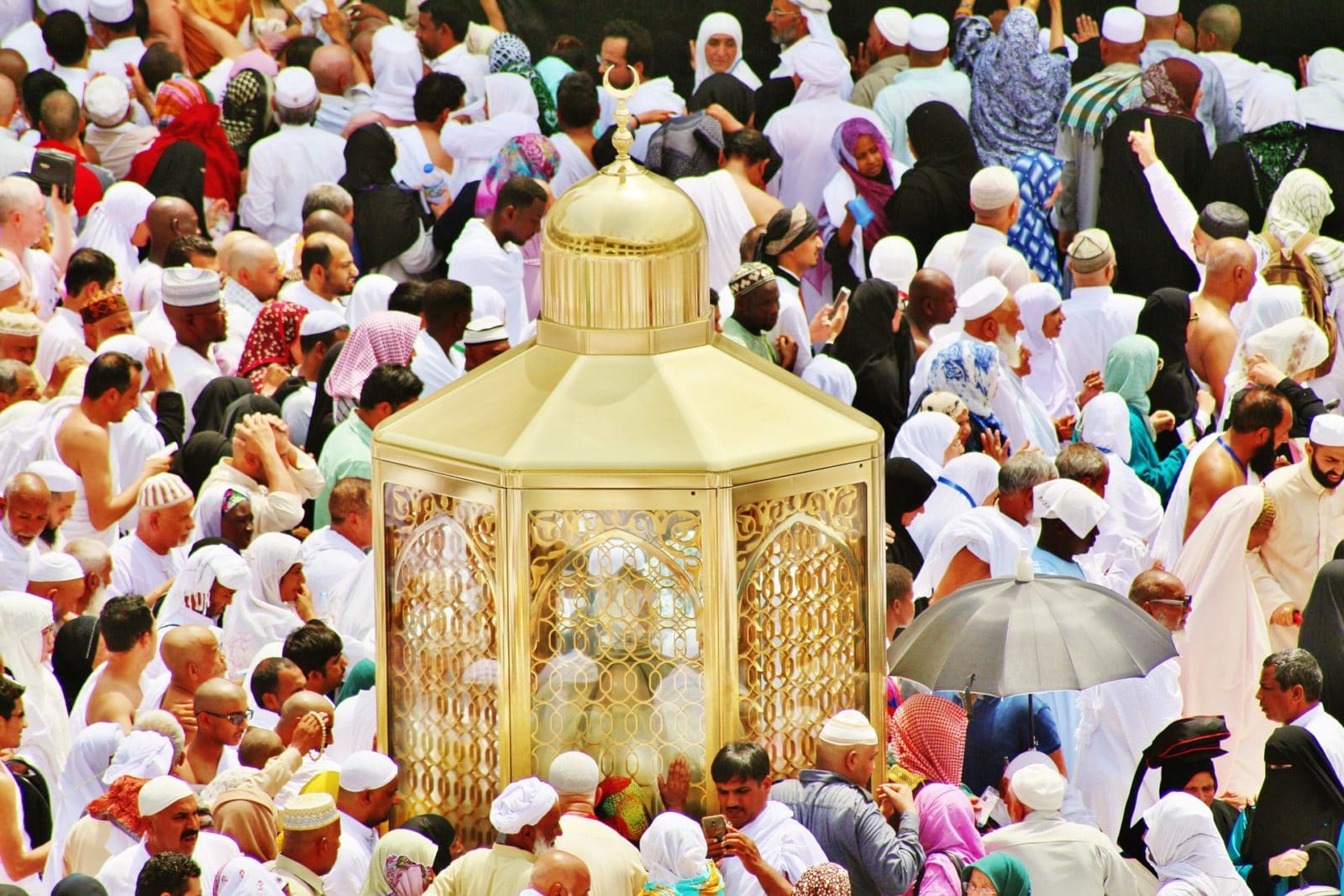 Regular readers here know two things about my  attitude toward Islam: (1) I am definitely not friendly to its doctrine, and (2) I definitely do not believe every last Muslim of the world’s billion-plus Muslims are out to “get” everyone else. From my viewpoint, the history of that ideology, especially in the twentieth century, has been one long frustration – usually by the imperial powers of the West, and particularly by Great Britain and Imperial (and later, Nazi) Germany – of the indigenous attempts of those within Islam to reform the religion and the culture. Indeed, for the German contribution to this sad story, one can read my The Third Way.

Which makes the following article by Thierry Meyssan, notwithstanding its glaring inaccuracies concerning early Christian history, all the more important, for as I mentioned in the previous week’s News and Views, Meyssan’s hypothesis is that Mr. Trump’s recent visit and arms deal with Saudi Arabia is about more than just continuing the same old pattern of support of a royal-clerical state. The deal, Meyssan contends, could not have been made without commitments from the Middle Eastern nations involved, and particularly Saudi Arabia, to move away from “political Islam” and support of radical groups like the Brotherhood:

A wind of secularism blows over the Muslim world

Behind the hypothesis, however, Meyssan is also implying that there is a fundamental break between London – which in his view continues to support “political Islam” – and the Trump Administration, which he contends is trying to lead an initiative to break from prior policy of tacit support and funding of such groups and the states that support them:

We know today that the « Arab Springs » were a British initiative aimed at putting the Muslim Brotherhood in power and thus reinforcing Anglo-Saxon domination over the « Greater Middle East ».

For 16 years, the Western powers have been rightfully accusing the Muslims of not cleaning up their own house, and of tolerating terrorists. However, it is clear today that these terrorists are supported by the same Western powers in order to enslave Muslims by means of « political Islam ». London, Washington and Paris have no problems with terrorism until it spills over from the « Greater Middle East », and they never criticise « political Islam », at least as far as the Sunnis are concerned.

By giving his speech in Riyadhh, on 21 May 2017, President Trump intended to put an end to the terrorism which is consuming the region, and is now spreading to the West. The words he spoke did indeed act as an electroshock. His speech was interpreted as an authorisation to finish with the system.

What resulted, according to Meyssan, was something akin to uncorking a bottle that had been living under pressure for centuries, and now, with the bottle uncorked, the result cannot be undone:

What had seemed unthinkable over the last few centuries suddenly took shape. Saudi Arabia agreed to cut off all contact with the Muslim Brotherhood, and raged against those who continue to pursue their collaboration with the British, and particularly against Qatar. Riyadh gave the signal for a cleansing which will sweep much frustration along with it. In a spirit of Bedouin vengeance, diplomatic relations have been interrupted, and an economic blockade was organised against the Qatari population – while in the Emirates, a sentence of 15 years of imprisonment was established by law for any individual who showed as much as a little compassion for the inhabitants of accursed Qatar.

And this has led to a corrresponding “outburst” of editorials:

In two weeks, the Arab Press, which until now had viewed the Muslim Brotherhood in a favourable light, as a powerful secret organisation, and jihadism as a legitimate engagement, has suddenly made an about-turn. Everywhere, everyone is publishing denunciations of the pretension of the Muslim Brotherhood who want to regulate people’s lives, and the cruel folly of jihadism.

This flood of commentaries, the centuries of frustration that they express, coupled with their violence, makes any back-pedalling impossible – which does not, however, mean that the alliance Iran-Qatar-Turkey-Hamas will go all the way. This revolutionary tsunami is happening in the middle of the month of Ramadan. Meetings between friends and families, which should be consensual celebrations, sometimes turn into arguments about what until now had been perceived as the basic truths of Islam.

As Meyssan goes on to observe, even Iran’s Revolutionary Guard harbors simmering resentments against the ayatollahs governing the country.

We then get a bit of complete nonsense regarding Christian history, which Meyssan assumes – like so many – was completely “clergy-less” in its early years:

Like original Christianity, which had no ministers (these only arrived in the 3rd century), original Islam and current Sunnism have none. Only Chiism has been structured like Catholicism and Orthodoxy. As a result, political Islam today is incarnated by the Muslim Brotherhood and the government of Sheikh Rohani (the title of Shiekh indicates that President Rohani is a member of the Chiite clergy).

If so, Christianity would be almost unique among world religions, especially from that part of the world, in not having any clergy; after all, it was an offspring of Judaism, and Judaism certainly had a clergy, and the rabbinate could be taken to be a kind of ministry in lieu of the ancient Hebrew priesthood. In any case, the Epistles of St. Ignatius of Antioch would certainly stand as a pre-third century witness to the fact that early Christianity was not the  clergy-less paradise that so many think it was; it was, on the contrary, very hierarchical and very sacramental.  Additionally, Meyssan makes more of Pope Paul VI’s dropping the use of the papal tiara – symbol of papal claims and authority – than should be: for while the symbol was dropped, the claims were not. Indeed, when one reads the documents of the Second Vatican Council, amid all the modern-sounding verbiage, those sections dealing with the papacy itself read very much like the “old fashioned” language of Innocent III, of Pius IX and Vatican One: there was no diminution of claims whatsoever. In short: the tiara could return tomorrow, because what it symbolizes – the claims themselves – are still there.

But enough of that, for beyond this, Meyssan’s view is worth pondering, for it carries some implications, some of which, Meyssan contends, are already happening:

Meanwhile, the whole region is buzzing – in Libya, the Muslim Brotherhood have left Tripoli, leaving a militia to liberate Saif el-Islam Kadhafi, and General Haftar to expand his influence. In Egypt, the General-President al-Sissi has asked his opposite numbers in the Gulf to draw up a list of terrorists. In Palestine, the political directors of Hamas have fled to Iran. In Syria, the jihadists have stopped fighting against the Republic and are awaiting orders. In Iraq, the army has redoubled its efforts against the Muslim Brotherhood and the Order of the Naqshbandis. In Saudi Arabia, the Muslim World League has excluded from its administrative council the Brotherhood’s star preacher, Sheikh Qaradawi. And Turkey and Pakistan have begun the transfer of tens of thousands of soldiers towards Qatar -which can now only feed itself with the help of Iran.

A new dawn seems to be rising over the region.

But assuming he is correct in his diagnosis, there are also some implications for the west, not the least is the cleavage between Washington and London, and this is where it could get interesting, for one implication of his analysis is that the Trump Administration has broken with prior British and American policy in a major way, and in so breaking, has broken with those factions within the American deep state that have been cooperating and to a certain extent leading and orchestrating the prior policy, including the tacit and very covert financial support of the same radical groups. We call them “neo-cons” or “neo-libs”, and they have been running American foreign policy since at least the Clinton Administration, with roots in that of the G.H.W. Bush administration. On this view, Mr. Trump has set the fox loose in the henhouse, and if it portends major changes in the Middle East, and a renewed commitment to American allies there such as Saudi Arabia, it also portends a major shuffling in the “deep state”. Time will tell if this effort will bear fruit.

And that means a long term effort will have to be sustained, for the nature of the change Mr. Meyssan is suggesting will be long term in nature, with bumps and fits along the way. What to look for? I suggest that if Mr. Meyssan’s analysis is correct, then the response of such nations like Indonesia, a predominantly secular Muslim state, will be crucial to watch, for that nation is undergoing its own internal struggles against “political Islam”. How such nations respond to this, how the Saudis respond to this, will be crucial in order for Mr. Trump’s initiative to work.