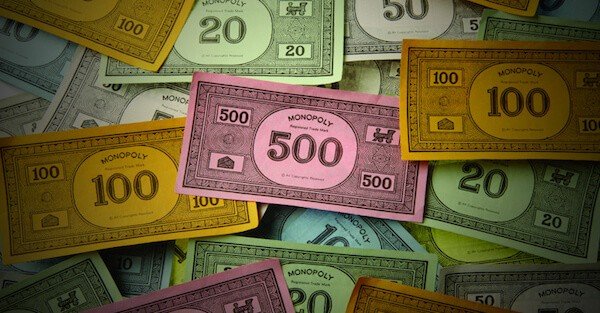 Even more impressive is that Total Household Wealth has increased by $40 trillion since the lows of the Great Recession in 2009.

No doubt there’s probably a multitude of central bankers and bureaucrats toasting their success in having engineered such magnificent prosperity.

And it’s certainly an achievement worth celebrating. As long as you don’t look too closely at the data.

Total Household Wealth is exactly what it sounds like– the total net worth of every person in the United States, from Bill Gates down to the youngest newborn baby.

So when you add up all the 330+ million folks in the Land of the Free and tally up their combined net worth, the total is $94 trillion.

The thing is that the VAST majority of that wealth, especially the incredible growth over the last 8 years, has been from increases in just two asset classes: real estate and the stock market.

In fact, stocks and real estate alone account for roughly 2/3 of the wealth increase since 2009.

I’ll come back to that in a moment.

Now, simultaneously, we see plenty of other interesting data, also published by the Federal Reserve and US federal government.

Both the Fed and Census Bureau, for example, tell us that over 80% of businesses in the US are “nonemployer” companies, i.e. businesses which only employ one person (the owner), and often provide his/her primary source of income.

Yet according to the Federal Reserve, only 35% of these small businesses are profitable. Most are operating at a loss.

In other words, only 35% of the companies which make up 80% of American businesses are profitable.

You’re probably already doing the arithmetic– this means that a whopping 72% of all US businesses are NOT profitable.

Shifting gears, there’s the little factoid that an astounding 40% of young Americans are living with their parents– the highest percentage in the last 75 years.

And who can blame them considering student debt in the Land of the Free also hit a record $1.4 trillion three months ago, more than double the amount since the Great Recession.

Again, all of this hardly seems like ‘wealth’ to me.

Then there’s the issue of wages, which have remained essentially flat since the 2009 Great Recession if you adjust for inflation.

According to the US Department of Labor, inflation-adjusted wages, aka “real hourly compensation” in the US fell an annualized 0.9% last quarter, and fell a dismal 5.6% in the previous quarter.

Once again, this is a pitiful excuse for ‘wealth.’

The same Labor Department report shows that productivity in the Land of the Free was flat in the first quarter of this year.

And productivity actually declined in 2016– something that hasn’t happened in at least the last 50 years.

Not to mention total economic growth in the Land of the Free has been pretty pitiful, logging a pathetic 1.6% last year.

And GDP growth in the first quarter of 2017 was just 1.2% on an annualized basis.

The US economy has exceed hasn’t surpassed 3% growth in more than 10-years, and it’s only happen two times so far in this millennium.

Seriously? This is “wealth”?

Look, I get it. Houses are ‘worth’ more than they used to be, and the stock market is much higher.

But these effects are heavily influenced by the trillions of dollars that was conjured out of thin air by the Federal Reserve.

ExxonMobil may be the most telling example.

In early September 2008, just prior to the financial crisis, Exxon had recently reported revenues of $72 billion, with $11.1 billion in net operating cashflow.

For the first quarter of 2017 the company reported revenues of $61 billion and net operating cashflow of $8 billion.

Plus, ExxonMobil managed to add nearly $20 billion in debt to its balance sheet over that same period.

So over 8-years, Exxon is making less money and has more debt. Yet its stock price is actually HIGHER.

More broadly, 66% of the largest companies in the US that have given estimates of their earnings for next quarter have issued “negative guidance”.

Companies expect to make less money. But stocks are near all-time highs.

Does this make any sense? Is that also wealth?

This is nothing more than the result of paper money that has been created by central bankers, allocated to a tiny financial elite, and dumped into the stock market.

It’s the same with real estate. Sure, prices are higher. But it’s not because of fundamentals.

In terms of population, there’s only been a 7% increase in the number of households in the United States since 2009.

There’s been a commensurate increase in the supply of homes as well.

So in terms of supply/demand fundamentals, the average price nationwide shouldn’t be that much higher.

But take a look at this chart, courtesy of the Federal Reserve.

And as the Great Recession showed in late 2008, phony paper wealth can go ‘poof’ in an instant.

With that in mind, it may be time to consider taking some of that paper wealth off the table and setting it aside for a rainy day.

Simon Black is an international investor, entrepreneur, and founder of Sovereign Man. His is about using the experiences from his life and travels to help you achieve more freedom, make more money, keep more of it, and protect it all from bankrupt governments.