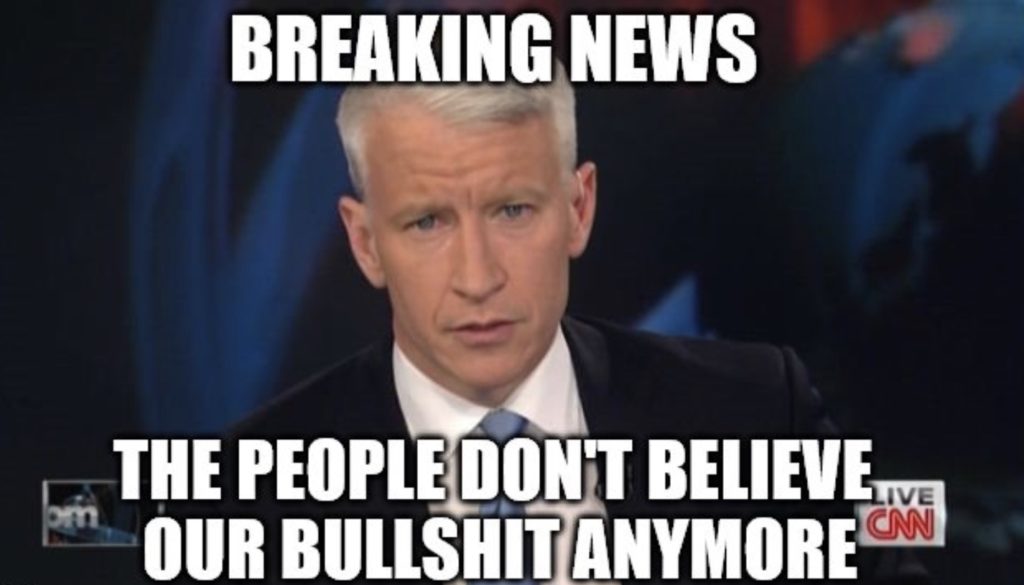 The 2016 Presidential election was a gigantic wakeup call for the corporate press in the U.S. not so much because Hillary Clinton lost, but because it represented the end of mainstream media’s ability to seamlessly force feed narratives down the throats of a gullible and pliant American public. The marketplace of ideas had been flooded by the internet and the people made a decision. The media wars came and went, and the corporate press lost, badly.

The election of Donald Trump was as much a middle finger to the U.S. corporate press as anything else, and the corporate media didn’t take too kindly to that. Rather than admit failure, refocus and compete within the freewheeling information age, the corporate media has resorted to endless whining and support for tech-overlord censorship. It simply knows it can’t win a fair fight, so it has decided to cheat.

As Robert Parry of Consortium News explains in his recent post, NYT Cheers the Rise of Censorship Algorithms:

Just days after sporting First Amendment pins at the White House Correspondents Dinner – to celebrate freedom of the press – the mainstream U.S. media is back to celebrating a very different idea: how to use algorithms to purge the Internet of what is deemed “fake news,” i.e. what the mainstream judges to be “misinformation.”

The New York Times, one of the top promoters of this new Orwellian model for censorship, devoted two-thirds of a page in its Tuesday editions to a laudatory pieceabout high-tech entrepreneurs refining artificial intelligence that can hunt down and eradicate supposedly “fake news.”

Since the Times is a member of the Google-funded First Draft Coalition – along with other mainstream outlets such as The Washington Post and the pro-NATO propaganda site Bellingcat – this idea of eliminating information that counters what the group asserts is true may seem quite appealing to the Times and the other insiders. After all, it might seem cool to have some high-tech tool that silences your critics automatically?

But you don’t need a huge amount of imagination to see how this combination of mainstream groupthink and artificial intelligence could create an Orwellian future in which only one side of a story gets told and the other side simply disappears from view.

As much as the Times, the Post, Bellingcat and the others see themselves as the fount of all wisdom, the reality is that they have all made significant journalistic errors, sometimes contributing to horrific international crises.

For instance, in 2002, the Times reported that Iraq’s purchase of aluminum tubes revealed a secret nuclear weapons program (when the tubes were really for artillery); the Post wrote as flat-fact that Saddam Hussein was hiding stockpiles of WMD (which in reality didn’t exist); Bellingcat misrepresented the range of a Syrian rocket that delivered sarin on a neighborhood near Damascus in 2013 (creating the impression that the Syrian government was at fault when the rocket apparently came from rebel-controlled territory).

These false accounts – and many others from the mainstream media – were countered in real time by experts who published contrary information on the Internet. But if the First Draft Coalition and these algorithms were in control, the information scrubbers might have purged the dissident assessments as “fake news” or “misinformation.”

The Times quotes the promoters of this high-tech censorship effort without any skepticism:

“‘Algorithms will have to do a lot of the heavy lifting when it comes to fighting misinformation,’ said Claire Wardle, head of strategy and research at First Draft News, a nonprofit organization that has teamed up with tech companies and newsrooms to debunk fake reports about elections in the United States and Europe. ‘It’s impossible to do all of this by hand.’”

The article continues: “So far, outright fake news stories have been relatively rare [in Europe]. Instead, false reports have more often come from Europeans on social media taking real news out of context, as well as from fake claims spread by state-backed groups like Sputnik, the Russian news organization.”

Beyond failing to offer any evidence of Russian guilt in these “fake news” operations, Tuesday’s Times story turns to the NATO propaganda and psychological warfare operation in Latvia, the Strategic Communications Center of Excellence, with its director Janis Sarts warning about “an increased amount of misinformation out there.”

The Stratcom center, which oversees information warfare against NATO’s perceived adversaries, is conducting “a hackathon” this month in search of coders who can develop technology to hunt down news that NATO considers “fake.”

Sarts, however, makes clear that Stratcom’s goal is not only to expunge contradictory information but to eliminate deviant viewpoints before too many people can get to see and hear them. “State-based actors have been trying to amplify specific views to bring them into the mainstream,” Sarts told the Times.

The key thing to understand about this push, is that it has nothing to do with fighting back against actual fake news, i.e. stories that promote total fabrications. The existence of truly fake articles is simply being used as a smokescreen to disappear alternative opinions from the public debate. That is the real intent of the “fake news” meme.

With the myth of the “American dream” rapidly being exposed as a sham, the corporate press needs to be able to efficiently propagandize the public in increasingly absurd ways, but the problem is much of the public no longer believes its nonsense. How can corporate media push Americans to support things against their interests and better judgement such more war, billionaire worship, and the surveillance state without silencing the opposition? It can’t, which is why it needs to marginalize intelligent and thoughtful people espousing a different perspective.

I know for a fact that the corporate press doesn’t care in the least about “truth” or “fairness” in reporting following my own personal experience with The Washington Post. Recall that last November, in the aftermath of the media’s panic at Hillary’s loss, the paper pushed forth slanderous accusations against 200 alternative websites including Liberty Blitzkrieg. For more on that truly deplorable episode, see: Liberty Blitzkrieg Included on Washington Post Highlighted Hit List of “Russian Propaganda” Websites.

Meanwhile, the Department of Justice…