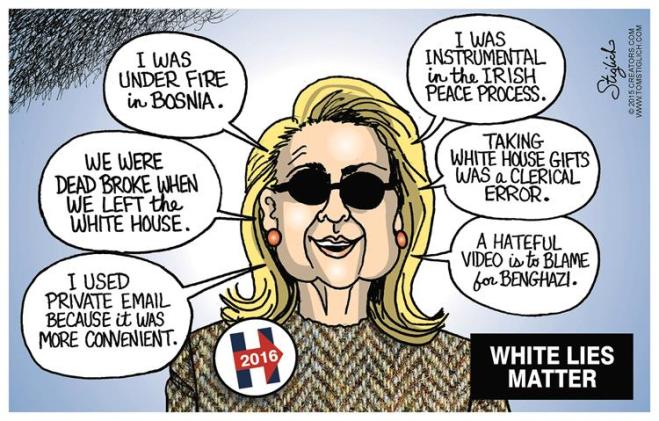 It turns out that several money bundlers for Hillary Clinton—Fredrick D. Schaufeld, Karen Schaufeld, Sonjia Smith, Michael Bills—donated significant sums to Jill McCabe, who was running for the state senate in Virginia, in 2015.

Well, Jill McCabe’s husband is an assistant FBI director, Andrew McCabe, who was involved in the Hillary email scandal investigation. You know, the investigation that falsely exonerated Hillary.

The hits keep coming. With the Clintons, there is no end of them.

President, no-President, Hillary is not off the hook.

For the moment, forget about FBI Director Comey’s latest flip-flop on the 650,000 Weiner emails. “Yes the Hillary case is reopened, no it’s closed.” Forget that.

Go back to July, when Comey recommended against prosecuting Hillary. He presented enough evidence to send her to prison, but stated that because there was no hostile intent on her part, a case couldn’t be made.

In July, Comey asserted there were at least four lies Hillary told at some point in the FBI investigation. Taken together, as anyone can see, they constitute a prosecutable crime:

* When Hillary said she didn’t use her unprotected personal server to send or receive emails marked “classified,” she lied.

* When Hillary said she didn’t send classified material, she lied.

* When Hillary said she used only one device that was connected to her personal server, she lied. She used four.

* When Hillary said she returned all work-related emails from her personal storage to the State Department, she lied. She didn’t return thousands of emails.

This all adds up to gross negligence in the handling of classified materials. It’s a felony. “Hostile intent” is not the issue. The FBI went after a former CIA Director, General Petraeus, who leaked classified information with no discernible hostile intent, and he was prosecuted. The law is clear.

The law states that gross negligence in handling and transmitting classified materials is enough to warrant prosecution for a crime, and it can carry up to ten years in prison. (Federal Penal Code, Title 18, section 793[f].) The quality of the intent behind the negligence has nothing to do with the law. Good intent, bad intent, neutral intent. All irrelevant. Comey knows that.

So, in essence, Hillary Clinton should have been prosecuted back in July. Comey rigged her exoneration. (In other hands, the case could still be reopened.)

The recently discovered 650,000 Weiner emails, according to several sources, contain more classified information that flowed between Huma Abedin and Hillary Clinton. These emails may also contain vital information about pay-for-play at the Clinton Foundation. And who knows what else—cloaked references to pedophilia, for example.

Comey claims there is nothing of interest in those 650.000 emails re the Hillary classified email case. Why should we believe him, since he conveniently overlooked the law back in July?

He has a problem: rogue agents at the FBI who are dedicated to bringing Hillary to justice. They are investigating her along several lines. Regardless of the outcome of the election, they’ll apparently continue, and if they can’t get satisfaction in a courtroom, they’ll pass along what they find to Wikileaks or some other outlet.

Information about crimes at the Clinton Foundation continues to pile up. There is no reason to expect it’s going to stop. Hillary, Bill, and their team are running a parallel…