EPA ignored warnings from its own scientists in the late 1970s when it approved a gasoline additive called MTBE. Removing it from contaminated soil and groundwater has since cost America untold billions of dollars. Similarly, in the 1990s, EPA approved land application of treated sewage sludges, a.k.a. biosolids, over the objections of its own scientists, including myself. Now, all of the pollutants EPA strictly regulates in air and water are present in soils at millions of times higher concentrations.

To understand why EPA often mishandles science, one must appreciate how disturbingly misguided some of its leadership, past and present, has been. In my book, Science for Sale, I discuss some notable examples, beginning with my own top career EPA boss, former Acting Assistant Administrator Henry L. Longest, II. 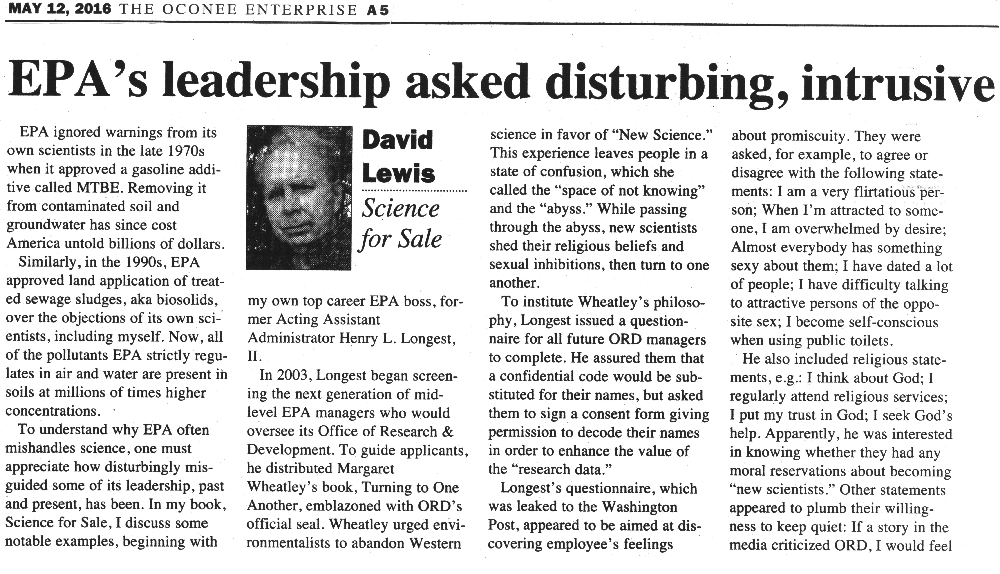 In 2003, Longest began screening the next generation of mid-level EPA managers who would oversee its Office of Research & Development (ORD). To guide applicants, he distributed Margaret Wheatley’s book, Turning to One Another, emblazoned with ORD’s official seal. Wheatley urged environmentalists to abandon Western science in favor of “New Science.” This experience leaves people in a state of confusion, which she called the “space of not knowing” and the “abyss.” While passing through the abyss, new scientists shed their religious beliefs and sexual inhibitions, then turn to one another.

To institute Wheatley’s philosophy, Longest issued a questionnaire for all future ORD managers to complete. He assured them that a confidential code would be substituted for their names, but asked them to sign a consent form giving permission to decode their names in order to enhance the value of the “research data.”

Longest’s questionnaire, which was leaked to the Washington Post, appeared to be aimed at discovering employees’ feelings about promiscuity. They were asked, for example, to agree or disagree with the following statements: I am a very flirtatious person; When I’m attracted to someone, I am overwhelmed by desire; Almost everybody has something sexy about them; I have dated a lot of people; I have difficulty talking to attractive persons of the opposite sex; I become self-conscious when using public toilets.

He also included religious statements, e.g.: I think about God; I regularly attend religious services; I put my trust in God; I seek God’s help. Apparently, he was interested in knowing whether they had any moral reservations about becoming “new scientists.” Other statements appeared to plumb their willingness to keep quiet: If a story in the media criticized ORD, I would feel embarrassed; and I’m always respectful of people of higher status than myself.

Longest was known throughout EPA for demeaning women. Although formal complaints were filed, this behavior never stopped. Over his long career, he received EPA’s highest honors, including two Presidential awards in Rose Garden ceremonies at the White House.

One thought on “The EPA’s Disturbing Leadership”