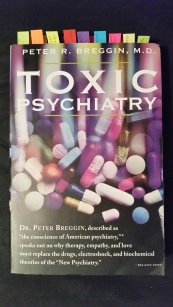 Dr. Breggin completely eviscerates the mainstream ‘chemical imbalance’ garbage that has been spewed for decades, and he does so in a logical, caring, and unprecedented manner.

The book to me is highly reminiscent of Dr. Brogans recent landmark book A Mind Of Your Own – The Truth About Depression.  Both authors – Breggin & Brogan – in each of their respective books seeks to do the same: destroy the fallacy of “chemical imbalance causes depression” with mountains of scientific evidence while also showcasing some common sense solutions the individual can seek.  For that, each individual should be taken seriously and supported as much as possible.

Moving on, as Dr. Breggins book outlines rather methodically, there is no biological basis for the chemical imbalance theory of depression carried out by the mainstream psychiatric establishment.  This is buttressed by endless data supplied by the author.

Of course, many folks are on a hair trigger when it comes to solving maladies with pills, and there’s a big reason for this.  Big Pharma/Big Medica has played a megalithic role in how people view drugs, and how people have access to information regarding them.

While in other countries it is downright illegal for Big Pharma to advertise, in America, such is par for the course.  America is one of only two countries in the world that allow this unfortunately.

How does that last fact couple with Dr. Breggin’s book?

After all, the Big Pharma advertising engine has created an unprecedented upswing in drug use where Americans now end up taking 1.4 Billion prescriptions yearly.

Disturbingly, as the Dr. Breggin attests, “People assume that FDA approval and the widespread distribution of a drug – with many patients taking it for months or years – means that long-term studies have found it safe in regard to side effects, drug interactions, dependency, addition, and withdrawal.  Thus FDA approval grossly misleads the public, lulling it into an unfounded security.

The PDR admits that Prozac’s effectiveness has not been tested in controlled trials of “more than 5 or 6 weeks” and that “long-term” usefulness has therefore not been demonstrated.”[1]

Statements such as those should make sensible individuals pause.

Of course, many of those prescriptions are still doled out by psychiatrists/psychologists in the tens of millions.

However, this book does not end up pushing a no-medication type of solution.   The author instead strives for a multi-solution approach, where he cites some examples of how other types of alternative care could help individuals if they so chose.

Ultimately, a great component of what the author recommends is fostering an atmosphere of utmost caring, which should have already taken place by now had the system not been so corrupt.

Listening, and doing so patiently would go a much longer way than prescribing most folks more prescription drugs.  Such a simple choice would solve so many inherent issues.

The system that Dr. Breggin expounds upon should be adopted, or at minimum elaborated upon.

After all, if the current Big Psych industry was doing its job, people would be getting cured, drug use would decline and not increase, and overall health would also get better.   However, we know the opposite is taking place.

Ironically, as some have stated, doing the same thing over and over again and expecting different results is the very definition of insanity.  To that effect, that’s exactly what the Psychiatric & Medical Establishment have been doing, and health in America has only gotten worse.

P.S. For those curious about more avenues regarding health, besides Dr. Breggin, other great doctors that might be of interest to many of you would be as mentioned before Dr. Brogan, Dr. Mercola, Dr. Duzanne Humphries, Dr. Sircus, Dr. Natasha Campbell-Mcbride, Dr. Russell Blaylock, Tetyana Obukhanych Ph.D and the work of Sarah Ballantyne PhD. These people all put out very high quality information regularly and are concerned with various aspects of health. But don’t take my word for it, do your own research so you can be better informed.